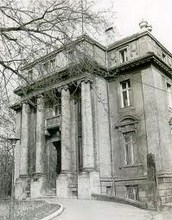 The history of the Karol Lipiński Academy of Music dates back to 1948, when, through the efforts of the Lower-Silesian Music Society, the State University School of Music was established. At the time, it was the fifth higher education institution in the city and the seventh tertiary music school in Poland. Initially, the Academy only had the Teaching Faculty; in 1949 the Vocal Faculty was established, and in 1950 the Instrumental Faculty and the Faculty of Theory of Music and Conducting, the latter being extended with the Composition Section in 1951.

The four-faculty structure has survived throughout the Academy's history, with the only alterations being made in 1954-1955 and 1987-1990. In 1972 the Academy's educational profile was extended by establishing the Institute of General and Applied Music Therapy (between 1983 and 1986, it was reorganised into the Institute of Music Therapy), Poland’s first facility doing research in this field.

In 1981 the Academy changed its status from the State University School of Music to the Academy of Music, which is when it was named after Karol Lipiński, an outstanding violin virtuoso. A particularly important event in the Academy's history was the change of its location to a new building at pl. Jana Pawła II (formerly pl. 1 Maja).

In 1998 the Academy celebrated its 50th anniversary. The event was celebrated by awarding the first honoris causa doctorate to Tadeusz Strugała, the Academy’s graduate. A year later another honorary doctorate was conferred upon Kurt Masur, also a conductor, Director of the New York Philharmonic, and in 2000 honoris causa doctorates were awarded to singer Maria Fołtyn and Count Wojciech Dzieduszycki. In the following years, this honourable distinction was bestowed on singer Teresa Żylis-Gara, conductor Stanisław Skrowaczewski, Russian pianist Victor Karpovich Merzhanov, Maestro Gabriel Chmura, Eugeniusz Sąsiadek, and recently on Mieczysław Tomaszewski.

In October 2009 the Academy launched another project – Building D was opened to house the Institute of Jazz Music. In 2013 the Academy celebrated its 65th anniversary. This Jubilee Year was marked by the completion of another project, Building E, including a state-of-the-art Concert Hall. This gave rise to a modern campus of the Academy of Music in the heart of Wrocław.

From its inception, the Academy was located in a Neoclassicist palace at 204 Powstańców Śląskich St., at the outer edge of the Southern Park. Over time, its space turned out to be too small for the expanding Academy, which is why a single-floor pavilion was built on the property to accommodate the Vocal Faculty, and then the Faculty of Music Education was moved to the building at Wietrzna St., and later to Hubska St. In 1992 the Academy acquired another building at the then 1 Maja Sq. (currently Jana Pawła II Sq). The relocation to a new building in 1993 was essential for the Academy’s functioning, allowing the integration of a thus-far scattered community.